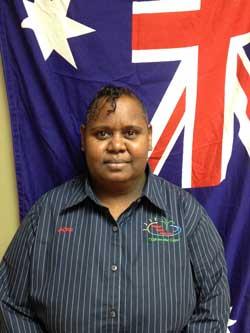 Jackie is the Traditional Owner Representative on the Weipa Town Authority. She has lived in Weipa her whole life and has a partner, two children, one grand daughter and a nephew who she cares for.

Jackie feels privileged to represent the Alngith Traditional Owner group (known as the Alngith people), as Napranum/Weipa was the Alngith ancestral land prior to becoming a township.

Jackie has served in a variety of government and community roles in Weipa, including the Act for Kids safe house in Napranum, Cape York Land Council, Napranum Council and Napranum Youth Centre.

In addition, Jackie was also a member of the first WCCCA Coordinating Committee and Main Trust. The Alngith people are members of this agreement, along with four other traditional owner groups.

Jackie currently Chairs the Alngith Corporation Board. She has also had extensive involvement in the development of the Weipa Township Agreement, including negotiating with Queensland State Government and Rio Tinto. She is a current Director and shareholder of the Ely Trust.

Through her WTA position, Jackie is looking forward to working for the Weipa community. “This is our home, and I will work hard to create positive outcomes for the whole community,” she says.