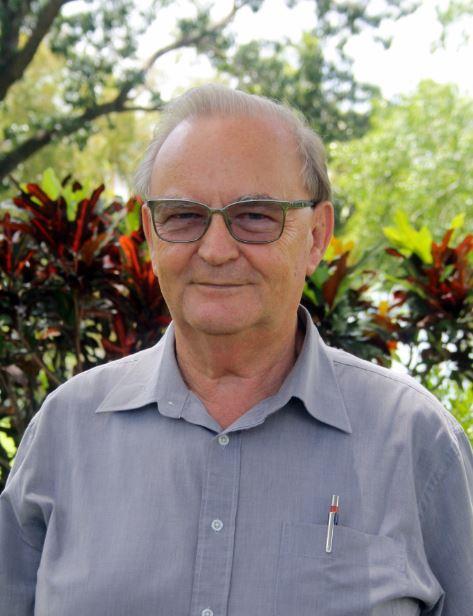 English by birth, Chris grew up in East Africa where he attended boarding schools in Kenya for his primary and secondary education.   Arriving in Townsville in 1961 he worked in retail before moving to Brisbane to study composition at the Queensland Conservatorium of Music.     Joining his family in Weipa in 1969 Chris intended to make a bit of money before traveling to Europe,  but instead met and married Kath and stayed to raise their three children

Chris had a variety of roles with Rio Tinto starting as a deckie in the Comalco marine section. Through external study with the University of Queensland and Charles Sturt University, he gained a BA and postgraduate diplomas in ‘GIS and Remote Sensing ‘ and ‘Information Technology’ leading to the role of GIS Administrator in RTA’s environment section.   Since his retirement, Chris has worked as a consultant to RTA as well as having a casual job with AMS security at the Weipa Airport.

Over the years Chris and Kath have been actively involved in the community.  They have played in bands for community events, as well as performing and assisting with music, lighting, production and photography for school plays, musicals, dance nights and Embley Little Theatre productions.

Chris hopes that as a member of the Weipa Town Authority he can make a valuable contribution towards the future development of the Weipa community not only through the technical aspects of his portfolio but also by encouraging and supporting events within the visual and performing arts spheres.